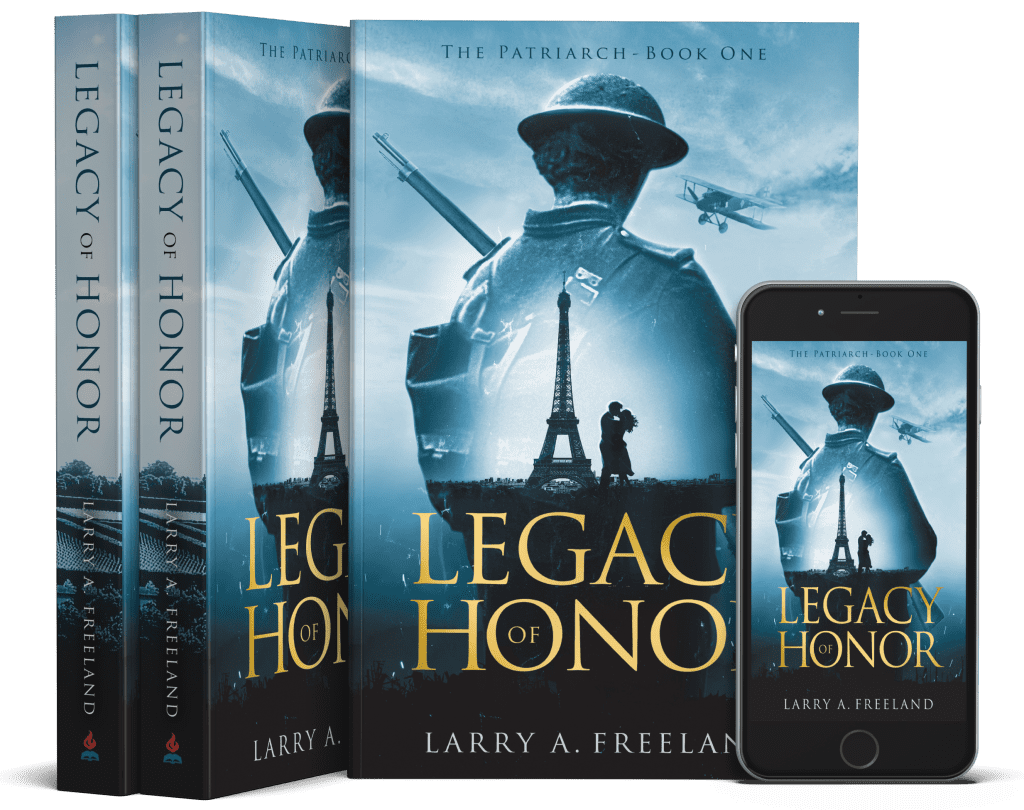 The Patriarch of the family, Sam McCormick, is part of a contingent of Ohio National Guard units called up to form the Rainbow Division. They were the first American Division sent to France when America entered World War I. He serves as an Infantryman (Doughboy) with the Rainbow Division of the American Expeditionary Force, fighting in France. He will see action in three major operations:  the Second Battle of the Marne (7-5-1918 through 8-6-1918), the Battle of Saint-Mihiel (9-12-1918 through 9-15-1918), and the Battle of the Argonne (9-26-1918 through 11-11-1918). During the War, he and his buddies will be gassed, experience horrific artillery bombardments and machine gun fire as they cross “no man’s land” repeatedly to close with the Germans and take their trenches.

He will cross paths with General Pershing the American Expeditionary Force Commanding Officer, General Douglas MacArthur the Rainbow Division Commanding Officer, Sgt. York (most highly decorated American soldier of the War), and Colonel George Patton (the first officer to be appointed to the new US Army Tank Corps).

Sam falls in love with Marie, a French nurse, whom he meets while recovering from his war wounds. They will marry in Paris, and she will immigrate to the United States with him. They settle down in a small Ohio town where Sam works in a steel mill as he struggles to settle back into everyday life. Sam will participate in the “Bonus Army March of 1932” in Washington DC and be drawn into the riots that ensued when the WWI veterans refused to leave their shantytown encampments.

Sam will rise to a senior position in the Steel Industry and be drawn into the Little Steel Strikes of 1937. On Sunday, May 30, 1937, he will witness the Memorial Day Massacre at the Ohio-based Republic Steel mill located in Chicago’s Southeast Side. He will then be drawn into a violent strike at his own Steel Mill immediately following the massacre. During the Great Depression, he will maintain his job at the steel mill and become a valued member of the community as he helps other families as they struggle with their daily existence. Nightmares resulting from his WW I experience will haunt him, while lung issues from being gassed and digestive issues from poor food, sanitary conditions and tainted water will plague him the rest of his life.

The Patriarch - Book One

This book plunged me into WWI...

This book plunged me into WWI – the filthy conditions, the never-ending danger, the courageous, young fighters, the strongly bonded friendships – and the daily realities of war. But what stuck with me was the reception by the community and the government itself toward those who managed to return home alive. I learned a lot through this book about what these men and women endured on both arenas. Larry puts you in the action – you can smell the filthy trenches, your lungs burn from the gas, you are ducking to avoid being shot. And oh! How he can create a bad guy! And a sweet love story. I really liked the book and am looking forward to the next two in the trilogy.

The reader begins on the war front, experiencing the horrors of the fight as if in the bunkers himself. Eventually, he learns the hardships of transitioning to his ‘new normal’ life back home, after surviving the travesty of his war experience. An emotional and intellectual journey.

Exceptional Story on Amazingly Accurate Pivotal Events From Our Past...

If the first book in the trilogy, Legacy of Honor by Larry Freeland is an accurate indicator, this series should be read by everyone. The descriptions of fighting in the trenches and the struggles of the soldiers in World War I is amazingly accurate. Almost nothing is overlooked with cars, baseball, steel mills, strikes and the bonus army. This journey into the key events of the early 20th century through the eyes of Sam’s family and friends is very moving and makes the history come alive to many who may have previously only read the dry historic accounts of so many pivotal events from our past.

Exciting and Historically Accurate Tale of War and Romance...

Freeland weaves together an exciting, action packed, and historically accurate tale of war and romance during and after World War 1.

Captivating and Realistic WW I experiences...

A captivating realistic story of one man’s World War I experiences both on the battlefield and postwar; a powerful account of the strength, hope and love that triumphs over the many obstacles soldiers and veterans endure.

Crawl through the trenches of France with American infantrymen and experience the horrendous brutality of WWI warfare … reminiscent of the carnage in Civil War battle scenes in The Red Badge of Courage. Then follow the “doughboys” as they assimilate back into American society, often with heartbreaking and unforgettable outcomes.

You can order the book at your favorite local bookstore, or online and in real-world bookstores worldwide.